“I have enclosed three photographs taken on 7 December 2005 when my wife and I were on a visit to Pretoria. My wife, Martha, and I lived there for 18 years until we retired to Knysna early in 2004. My wife was born in Knysna where her parents originated. Whenever my father-in-law visited us there, he used to ask about a cross-section cut from a large yellowood tree that used to be on display in the old Cultural Museum in Boom Street, just next to the entrance to the Pretoria Zoo. However, some years ago this building had been flooded and all the exhibits had been removed and stored in the basements of buildings throughout the city. 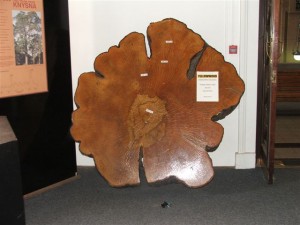 One day I attended a meeting with other School Inspectors and the Head of Museum and Library Services in what by then had become Gauteng. I asked him about this piece of wood and he told me he knew where it was and when next the old man visited to let him know. Sadly, before that could happen, my father-in-law died on 22 November 2002, aged 91 years. He was Sarel Stephanus Botha (whom I shall refer to as Fanie).

You can imagine my surprise when on this 2005  visit with my grandson, Andrew Woolard to see the dinosaurs at what used to be the Transvaal Museum (I don’t know what it is now called) in Paul Kruger Street opposite the Pretoria City Hall. There I saw the yellowood Fanie had been longing to see. Strangely it was standing in a corner of the display hall where the Austen Roberts Bird Collection were housed. I rushed off to where 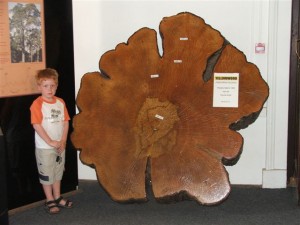 we were staying to collect my camera to record his great grandson standing in front of the yellowood. Why? The answer is because Fanie in about 1932 was a young man working with the woodcutters who had felled the tree from which the cross-section was cut.

Fanie was born at Geelhoutboom not far from Karatara. He often used to tell us that, as a young boy, he and his brothers used to collect pieces of “blackwood” in the forest for use as firewood because they regarded it as an “indringer” – a weed. I suppose one can regard it as such, as I am told it is an exotic brought in from Australia. However, I am not an expert in that regard. All I know is that blackwood furniture pieces were sold in large numbers in earlier years by such outlets as Fechters, Jonkers and Fechter & Fechter, all in Main Street.

One of my wife’s aunts on her mother’s side of the family was Nancy (born Ainslie) who was married to Joseph Rabbolini. Joseph worked for many years for Thesens on Thesen Island, but doing clerical work. Joseph was acknowledged by Dalene Matthee for his help in her book “Die Moerbeibos” about the Italians who were brought in to supposedly start a silk industry at Gouna. Joseph was of course a second generation descendant of an 8 year-old boy wh 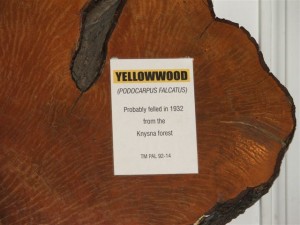 o had  come out with the group, his parents intending to follow but never arriving.

He and Nancy used to live in Rawson Street, Knysna and their garage, used by Office Supplies as a storeroom, finally disappeared a little while ago when the recent extensions to the Shopping Mall were built.”

Yours most sincerely, Dennis Woolard.