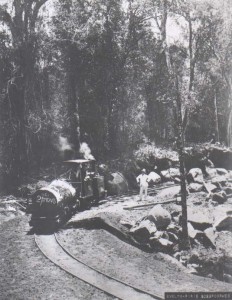 Operating between Knysna and Diepwalle, the South Western Railway Co. Ltd was built over a period of three years from 1904 to 1907 and continued for forty-two years, to finally close down on 30 April, 1949. The railway was built in 1904 by Carl Westveldt, a Swede, and on its completion, Mr H. Noren was appointed General Manager.

The company was owned by local businessmen, Messrs. Thesen, Parkes, Templeman, Morgan, Noble, and others, and was formed because the ox-wagons could no longer meet the demand for timber required by the saw-mills, and it functioned until transport by motor-lorries was found to more satisfactory and economical.

This unique 2-Ft. narrow gauge railway line transported timber (mostly Yellowwood) from Diepwalle to Knysna for milling and shipment and was affectionately known by the people of Knysna as the ‘Coffee-Pot’. It ran three times a week 22 miles into the forest, to Diepwalle and back. Spark arrestors were fitted on the engine to prevent forest fires and gave the engines their “coffee pots”, fat, bulbous fittings over their funnels, hence the name. There were 33 trucks designed to carry up to 70 tons of logs.

The route ran from Parkes’ Mill in Knysna to Thesen’s and then to the jetty for loading onto ships. There were three stops in the forest, Bracken Hill, Parkes Station and Diepwalle. The Knysna station was a little corrugated iron building with a pitched roof and lean-to’s on either side lined with wood on the inside.

The railway also afforded a wonderful means of entertaining visitors and for those who grew up in Knysna, the “Coffee Pot” was part of the holiday fun. Passengers were treated to very leisurely journeys – the train rarely exceeded 6 miles an hour, and beauty spots would be pointed out to the passengers along the way. 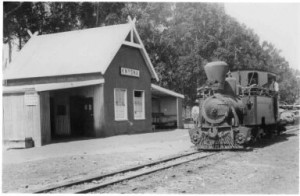 However, by 1911, the running costs of the railway were a constant worry to the Directors of the Company. There was a general depression in the timber industry, and the distance and costs of transport inhibited local prosperity. But there was a sudden wave of optimism with the discovery of deposits of lignite. The Knysna Lignite Syndicate was formed and hoped to be able to supply locally mined “brown coal” to fire the boilers of the ‘Coffee Pot’ engines. Hopes were high, but sadly, the quantity or quality was inadequate, and by mid-1911 the whole venture fell away. 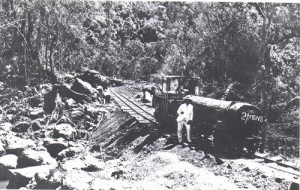 In May 1916, Knysna was flooded after torrential rains. The flood not only washed away the brand-new concrete bridge over the Knysna river but also some of the railway bridges in the forest. In some places, tons of earth were washed away. Filling and repairs were started immediately and a mere month later, when the first train was again able to run to Diepwalle, approximately 16,368 tons of material had been excavated and deposited to replace what had been washed away.

The railway had to be put out of action during repairs which meant a further loss of revenue. It was a bad year for the Company with World War I and the loss of trade due to the reduction in the number of visiting ships at the port. Meanwhile maintenance and general repairs had to continue to keep the railway line in good order.

At last, in 1919, the Company made a profit! But unfortunately, in that same year the Government moved the sleeper factory from Knysna to Mossel Bay. This was a real blow as the railway would be used even less, with many a repercussion to the fragile economy of the town. 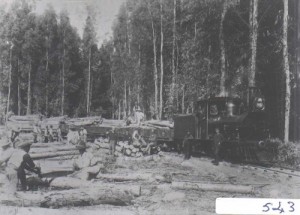 Throughout the 1920s’ and 30s’ maintenance costs and taxation took their toll and soon another engine had to be bought. The S.A.R. provided a 2nd-hand engine no longer required on the Umzinto line. The engine was in good condition and gave many years of service.

But in 1927 perhaps the most serious blow which fell was when the S.A.R. finally connected Knysna with George by the standard 3 ft.6 ins. gauge line and any hopes that they would eventually take over the forest railway were dashed as all narrow gauge lines were considered to be obsolete. Revenues from the wharf had also decreased dramatically as it became so much cheaper to bring goods to Knysna by train than by sea and shipping activities at the wharf died down with fewer ships coming into port.

Financial concerns over the company had still not abated.In 1944 a 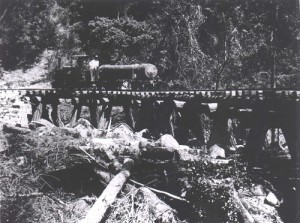 Committee from the S.A.R. & H. came to Knysna to examine and report on the state of the “Coffee Pot” railway with a view to closing it down. Corrosion was very bad on the line and “broken rails” were likely to become a major problem, and it had already been stated the line would carry no more passengers. Although the S.A.R. & H. recommended closing down the railway 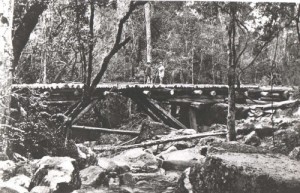 due to the deterioration of the line, they were forced to keep it going at least temporarily, because of the shortage of motor transport caused by World War II. It was then decided to have the line re-conditioned with old rails from South West Africa. 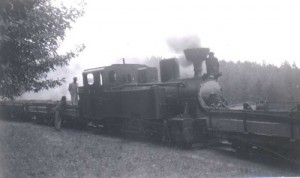 In 1946 the re-laying of the track was completed with the second-hand rails and pronounced good for another 20 years. It was a difficult task and took over a year to complete. A modest tribute remains however, in the foot or two of rail set in the pavement on the right hand side of Long Street diagonally opposite Thesen House. But safer rails were not the answer to the problems of the railway. After the end of the war it was used less and less, as it became uneconomical to rail timber and the forestries, merchants and ship owners used private lorries instead. This meant another drop in the Company’s earnings. 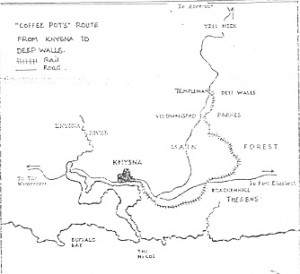 The historic decision was taken on 7 November 1947 to liquidate the South Western Railway Company and close down the railway by S.A.R. & H., and was sold to a sugar mill in Natal. The official closing date was fixed for 30 April 1949, and it was Tom Botha who drove the last train on the line. It was a sad day for the people of Knysna to have to bid farewell forever to their unique and beloved little “Coffee Pot” railway and Knysna certainly lost one of its quaint old characters.